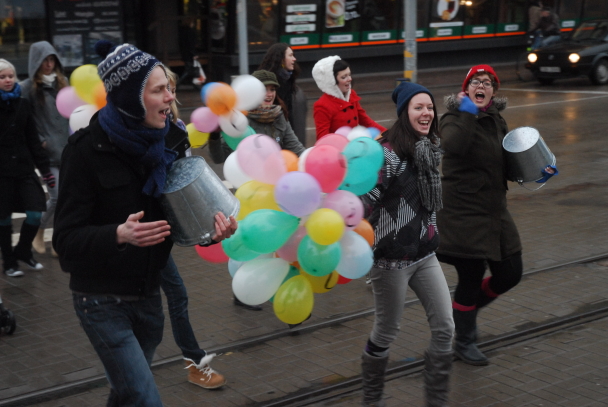 For the second time I visited the Latvian city of Liepaja to coordinate a workshop at the iweek of Liepaja University’s New Media Art study. The simple task we were given was: make a billboard. After two days of brainstorming, discussing and sketching the students came up with the idea to ask Liepaja: what makes you happy? Or ‘Kas padara Liepaja laimigu?’ (what makes Liepaja happy in Latvian). A billboard was made that was empty but for this sentence and four big markers were attached to give the Liepajans an opportunity to answer the question.

So we paraded the billboard across the streets, chanting the question and drumming on buckets, to arrive at the destination and place the billboard. Within minutes people had filled the billboard with all sorts of answers. Within an hour all four markers were stolen. Within 12 hours someone had used a spraycan to paint his mobile number all over the billboard. Seems we asked a relevant question. And we made a Latvian newspaper (latvian link / google translate english).

Student Michiel de Koning was inspired by another workshop about RFID, tagging and other developments. He explains it in this brief video.