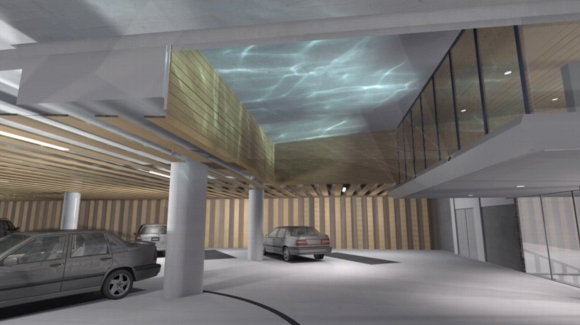 Parking garages are not known for being particularly hospitable. Cramped and dark in most cases. The city of Groningen has some wonderful exceptions to that rule though. There is a beautiful example at the Ossenmarkt. A cylindrical affair that feels roomy and is easy to use. Artist Peter Struycken added the final touch with his lighting installation. Yesterday the artwork ‘Illusion of Control’ was officially opened. It was made by artist Martijn Veldhoen who created the illusion that the garage is under water. A reference to the ‘Damsterdiep’ that used to flow there. After the mandatory humdrum speech by a local politician, I was asked to interview the artist. Always a challenging prospect, considering most artists have chosen to express themselves visually for a reason. But Martijn was well-spoken, honest and interesting. His work can be seen at the CBK Groningen and the Tschumi paviljoen temporarily and at the bottom of the Damsterdiep for the next 5 years.